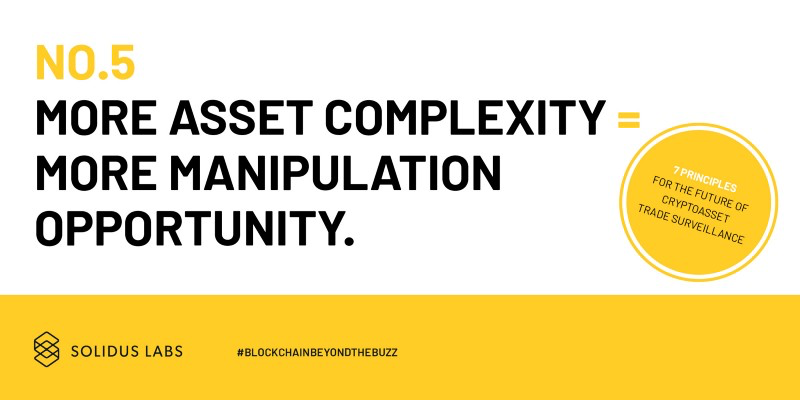 The SEC has repeatedly cited the lack of comprehensive trade surveillance in rejecting Bitcoin-ETF applications. Some exchanges instituted traditional solutions and were denied nonetheless. Here’s one explanation why

SEC Chairman Jay Clayton spoke at the Consensus Invest Conference two weeks ago and the digital assets space, as well as many institutional investors, tuned in.

Clayton’s most notable statement, widely reported by both crypto-focused and mainstream media, was that for him and his agency to be “comfortable” enough to approve Bitcoin exchange-traded funds, upgrades that would include key safeguards are necessary. He specifically mentioned market surveillance for digital assets, as well as custody solutions. Since Clayton’s statements, the SEC already announced it will take longer than anticipated to reach a decision (PDF) regarding additional pending crypto-ETF applications, reiterating the complexity of this challenge.

Despite the headlines, this isn’t quite news. The fact that stronger surveillance standards are necessary for healthy and regulator-friendly digital asset trading, and for an ETF approval, has been made clear numerous times.

Throughout the year, various firms applied for a Bitcoin-ETF approval, and throughout the year, they’ve been rejected. Surveillance has been repeatedly cited as a major concern. As one example, in the SEC’s rejection of Gemini’s application to sell investors a Bitcoin-ETF product, a 90-page document(PDF), the word surveillance (often in the context of shared-surveillance) appears 135 times and the word manipulation appears 132 times.

Trade surveillance, briefly, is a set of tools put in place to monitor trade activity and alert market participants whenever suspicions arise for manipulative or abusive activity. Common forms of manipulation include terms like front-running, spoofing, pump and dump and wash trading. At the absence of effective surveillance, there are concerns that as much as 70% of volumes in top crypto exchanges is manipulation-driven. It’s easy to understand why the SEC is reluctant to give its blessing to an ETF under such circumstances.

It begs to ask: If for months now the SEC has been rejecting ETF applications because surveillance isn’t satisfactory, why hasn’t applicants just instituted surveillance systems?

The answer is that some tried. Forward-thinking and responsible exchanges partnered with companies that provide surveillance for traditional markets. They were nonetheless denied.

Why? Because a new world of digital, blockchain-based financial markets requires a new class of surveillance infrastructure that’s blockchain-native and tailored for digital assets.

The conversation we all need to have is therefore not whether or not surveillance is needed. We need to ask what does effective surveillance for digital assets look like.

Unlike traditional markets that open at 9:30 am, close at 4:00 pm, don’t operate on holidays and are subject to time differences, digital assets are traded ceaselessly, across the globe. This has massive implications for surveillance — from the need to process information non-stop, to questions surrounding real time-alerting abilities. In traditional markets, T+1 (one day latency) is a standard for surveillance. That’s possible since markets close and allow time to process and organize data. In blockchain-based trading transactions continue around the clock, raising a need for more dynamic and real time solution.

Blockchain-based assets allows trading fractions of equities, unlike anything possible in traditional trading. This is one of their great promises — fractionization would allow smaller investors access to financial markets and for traditionally illiquid assets to be liquified. However, it also means that ethereum, as one example can be traded at fractions as small as 18 decimal points, compared to significantly less in traditional assets. In conversations with some exchanges they describe having to offload data from the traditional surveillance systems they are paying for, assigning analysts to reprocess it, and then re-upload it for manipulation analysis. A blockchain-native trade surveillance system will resolve this hurdle.

While traditional assets are standardized and trade in very specific arenas that all use the same — or at least similar — rules and denotations, digital assets are traded globally in many shapes, forms and environments. Some standardization will likely be introduced as the industry continues to evolve, but blockchain-based trading, created to democratize and increase access, will never be as standardized as traditional assets. Surveillance systems tailored for blockchain must be more adaptable, customizable and dynamic than any system before. They also must take into account that the lack of unified standards make shared surveillance tougher in digital assets.

One of the biggest issues troubling compliance officers when it comes to surveillance and manipulation is the challenge of false positives. It’s a major contributor to the cost of compliance in traditional trading, with actual humans often having to analyze reports coming from the surveillance systems to verify that they are actually a concern. Naturally, with a completely different technological basis for digital asset trading, this problem is magnified. Part of the problem derives from the use of legacy rule-based systems. Essentially, those systems are manually programmed to respond when a set of conditions take place. False positives arise to a large degree because of the rigidity of rule-based systems. That’s good enough in traditional finance where the trading rules are relatively rigid. In blockchain however, it’s a mess, with some cryptoasset exchanges mentioning extremely high percentages of the alerts their traditional surveillance systems generate are false. By relying on advanced machine learning models, blockchain-native surveillance systems can offer much more nuanced surveillance that constantly hones its rules based on real trade activity. It’s the key for effective blockchain-based trading and for more efficient surveillance in general.

Traditional, rule-based surveillance systems are good at responding to known threats. In traditional markets that existed for over a century this makes sense, as most threats are known. In the constantly evolving blockchain-based trading realm, however, there are plenty of unknown unknowns — what manipulation will look like in 2, 5 and 10 years can be completely different from what we know in traditional trading and even from today’s digital asset trading. A machine learning-powered surveillance system will be able to, as its name suggests, learn as new patterns reveal new manipulation attempts or openings for manipulation, as they form, rather than after they happened.

The above is just a partial list and though it can go much longer, the bottom line is simple — digital assets are powered by new cutting-edge technology, and they need infrastructure that’s also cutting edge. Surveillance has been repeatedly cited as the key for a crypto-ETF approval and generally, for a sustainable and safe blockchain-based trading ecosystem. To respond to the requirements dictated by Clayton and the SEC, it’s time that we not only use blockchain to reimagine finance, but also rethink the surveillance needed to support the vision of a digital, blockchain-powered economy.

To learn more about our product schedule a demo, visit www.soliduslabs.comor connect via twitter (@Solidus_Labs) or e-mail (hello@soliduslabs.com). We’re always happy to have a conversation.